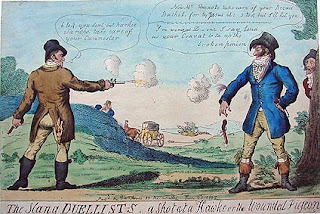 It's a shame the noble art of Dueling is no longer allowed!

If one had to back up one's comments with sword or pistol, I believe we would have a more civil world.

Here is a case in point, over remarks made on Kiwiblog.

The gauntlet has been thrown down.

Will we get to see roadkill?
UPDATE:

No, we won't see roadkill as one party has no honour!

Typical of persons who like to throw shit about, when called out they cry out that they are a pacifist and would never stoop to physical combat! Having personally met the other party, the roadkill has probably made the first smart call in his life...

Such a person should be branded a coward and shunned from the company of his betters!

I believe once they would have been horsewhipped out of town...
Posted by Oswald Bastable at 18:17

I'd Choose swords, any muggins can point a pistol, but swords, that is real fun...Uno!, Duo!...
(Sharpe for the thick ones)

Pistols? Nah I could do that with my eyes closed.

It is all a bit rich, when they can sing as much mud as they can get their filthy little hands on, but when Whale steps up with a great big "bring it on" he's the bad guy, can someone please explain the logic?, it's got me fucked.

I say we play paintball with them.

I'm sure after the first few hits they'll work out that we're playing with or without their willing participation.

Don't forget, a couple of days in the feezer ensures good flight characteristics for paintballs.

Lefty scum. Those two couldn't rustle up a working gonad between 'em.
What a perfect demonstration of leftist's ability to slide out from under, avoid the issue, move the goalposts and in general behave like oleaginous weasels.
*spit*
I'd rather converse with a syphilitic shithouse rat.

The only one ready to front is a girl.

Says it all really.

"I'd rather converse with a syphilitic shithouse rat."

Which explains why you hang about with these guys!

My God! the wit! the devastating insight! The sheer depth of Anon's intellect!

Anon secretly lusts for us...

Wit???...there is a sayong i use frequently.