On the subject of Mad Cow's Disease: 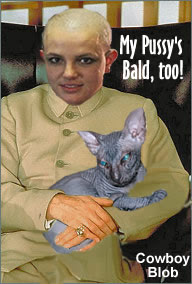 Hat Tip to Cowboy Blob
Posted by Oswald Bastable at 19:17

Anyone else think she looks kind fo like Charlie Manson now?

Jesus leave the poor girl alone will you.

Shes clearly gone over the edge and the US media are trying out scum the Euroweenies in the field of princess killing.

The girl needs help, not a shove.

Lets show a little more class shall we.

Murray - I would be very surprised if Britney reads Oswald's blog so she wont be hurt by it.

Yeah of course you're right when you're already buried under a pile one more pointless attack isn't going to change much.

Oh hang on that doesn't really look like a reason to make fun of her though.

And isn't that pussy often on display.
Or am I thinking of Paris Hilton?

That's life when you chose to live in the goldfish bowl of fame.

Not everyone loves you- and says so!

Ah she choose it did she... wait I want to chose it to!

Well where's my fame and fortune then?

I'm thinking she missed the fine print in the contract about podgey middle aged guys living in semi-rural NZ making fun of her emotional collapse.

Tell me at what level does someone become open season and stop having the right to not be treated like a fictional character in a soap opera?

Which reminds me- whatever became of Michael Jackson?

If he was still arount, britney would be 'safe'


Some might say it's cutting down tall Poppies, but I prefer to think of it as pulling out ragwort!

Britney should move to NZ asap and join the local smear of undertalented and paying-for-publicity $2 celebrities. Woohoo!

OMFG. And I'm trying so hard to stay out of the Britney fray.

Is it okay if I laugh hysterically at this, though???

My interest in all things Brittney could be kept in a matchbox, without removing any of the matches.

But I saw the picture and it amused me...