What kind of PC weenies do we have in defense headquarters? 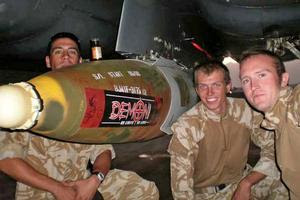 What kind of limp-wristed, PC, hand-wringing, sooks do we have posing as soldiers these days?- I'm talking about the REMF's in Defense Headquaters, so there is no confusion here.

Bombs and shell have been sent over with a bit of decoration since their invention.

And now its a problem- why- because some scote will be offended two microseconds before he is turned into ant fodder.

And what are you going to do to the troopies as punishment?- send them to Afghanistan?

UPDATE:
"...Green Party MP Keith Locke said today the Defence Force should explain exactly what role the soldiers had been performing at Bagram airbase where the photos were taken.

"We have been led to believe that the NZDF unit at Bagram was purely to facilitate the delivery of supplies through to our Provincial Reconstruction Team in Bamien province," he said..."

Keith Locke- go fuck yourself with a tree!
Posted by Oswald Bastable at 17:48