Oh look- another opportunity for Nanny to restrict something! 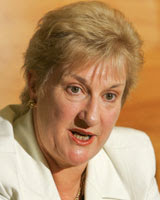 "Transport Minister Annette King has raised the prospect of Parliament being polled on lifting the legal driving age, saying it was probably time to see what MPs thought...

From the other side (the non knee-jerk one)

"We are looking at a variety of things but simply raising the driving age isn't one of them," Mr Duynhoven said. "Virtually all serious crashes involving a young person are when they have their mates with them or they are racing one of their mates."

Holders of restricted licences are not generally allowed to carry passengers. Mr Duynhoven said measures would seek to achieve better compliance of licence restrictions including educating parents, "because a lot of parents turn a blind eye to their kids travelling with their mates and some parents are even stupid enough to pay their kid's fine".

Age was not a panacea, he said. Fifteen-year-olds might be more likely to adhere to parental advice than older teenagers, but scientists had discovered full brain maturity did not kick in until about 25..."

Or not, as may be the case.

Posted by Oswald Bastable at 18:11

How about teaching them to drive responsibly, not just the blasted speed kills over and over.

Advanced driver training, tougher testing, and crushing of the cars of serial offenders.

I don't know what it's like in NZ, but it can't be that different from here in OZ, here the driving test is not hard at all, most of the drivers here don't know how to 'drive', they can move the car from A to B, but when something goes wrong in the process...

We place to much emphasis on things like parking, whilst important we never even test a person to see if the can do an emergency stop or swerve and recover.

We know only to slam on the brakes and "Oh dear God..."

Too right, MK.
What about graded driving tests, with licence plates to indicate the level of expertise of the driver? With corresponding reductions in insurance premiums?
Nobody would want to be stuck on the "yellow=dummy" plates for long, they'd put some effort into their driver training to get the top-coloured plate.
And perhaps the police could be persuaded not to pull over an expert driver for doing just a few k's above the limit....

What about requiring that anyone under the age of 18 be required to gain an advanced driver cert to be allowed to drive.

I think most of us know 15 year olds who would be responsible drivers and plenty of 23 year olds who shouldn't be given the keys to a Tonka Toy.

Give those with the ability the option, those that can't cut it can catch the bus.

I recall that the dope behind the wheel of the VW wasn't the only dope found either.

Don't get me started on the few kays over the limit KG, some roads out there are perfect for about 10 or 20 kays over 110, but we can't. What they don't take into consideration is how distracted and bored you get driving at slow speeds the whole day. By the time you stop, revive and survive your ass over to point B, the holiday is over.

I don't know why everyone should not be made to go for "advanced" driver training, the one that i went for was such an eye-opener. It was fun in the sense that you got to slide the car around and things like that but you walked away knowing how hard it is to bring a car back under control once you've lost it.

And there were so many other things they teach you, that you don't think about, it should be the standard for all drivers, not optional.

Although I will mention that until you can 360 a 10 ton APC you haven't really driven anything "defensively".

Well the CC was lazy and couldn't be arsed cranking the turrent by hand. What can you do.

Do you know anything about this close protection driving Murray?

While back i wanted to go for one of those, but i couldn't find anything, probably wasn't looking in the right places..

Let me know if you know of any places in OZ please.

Are all New Zealand women this ugly? No wonder Australians prefer are so proud of their sheilas!!

it's blatantly obvious this culture extends far beyond just driving... I think Oswald would have lost count of all the sod's he's had to deal with that cry for help when it's gone pear shaped, as have I... It's remarkable how many people I come across with absolutely no desire to understand any more than basically necessary.

mk I know nothing of any such course and you actually have to be a government employee to get one here in NZ.

Don't know about Oz, haven't made the transition yet. Hoping to be deported at tax payer expense when Helen makes it against the law to have a penis.

Celtic morning a shit load of Aussie girls marry Kiwis because their men are beer swilling louts and all our ugly women go into plotics because they're sexually frustrated.