What is it you don't do with Chuck? 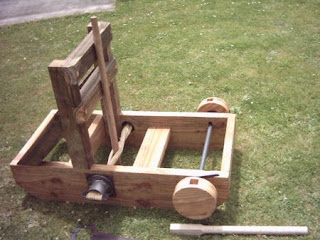 This device looks even better when seen up close. Designed to fling large rocks, metal balls or the heads of those who came second, it's one of the first of the seige engines- the mangonel.
Looking at it, I immediatly thought of a couple of new and interesting applications. (Probably not really new, as the Romans were quite creative along these lines)
Under my rule, Corrections would be purchasing a few of these- they seem eminantly suitable for an inhumane castrator! Pull the cord and watch Mr Rapist's reproductive organs disappear towards the horizon!
A larger model would readily snap a neck, possible removing the offending head. Any particular heads come to mind lately?- ones that already look like a bowling ball, perhaps?
***
The whole day at the Jousting Tournament at Harcourt Park, Upper Hutt (Here) was a most entertaining one.
A great look at our heritage, without the taxpayer being bleed for it! Now why is it that one lot waving spears & clubs is well-funded from the public trough, yet another group get squat?
I'm a re-enactor too (from a later period) and we don't get a cent from the taxpayer to celebrate our heritage and culture- exactly as it should be!
These people at the event today are an interesting lot- I talked to a couple and was most impressed by the depth of knowledge they had on their particular interest.
It's not to late to have a look- it's on tomorrow and the weather forcast is even better!
And don't forget to take money for your Gnome Homes!
Posted by Oswald Bastable at 19:05

Now that looks like a whole lot of fun. I'd prefer a 25 pounder field gun, but hey--these days you have to use whatever comes to hand.

Now one of the chaps at my club has a model 25 pounder, that fires 12 gauge rifled slugs!

*perk* he has? Does he have a set of plans for it?

Scale it up and you have a "rapid deportation device" - perfect for quick and efficient deportation of illegal immigrants.

I don't know- and as the old bugger is stone deaf, he's a bit hard to communicate with!

There's another use already!

They can chose to upgrade to 'Deportation Business Class'

That's where we don't deliberatly fling them at something hard!

Well, fancy that. I already have one of those fine gnome homes in the garden. No Gnomaloo, though. My gnomes just have to cross their legs.

Here's a project for you Oswald

We already have these available here in NZ!