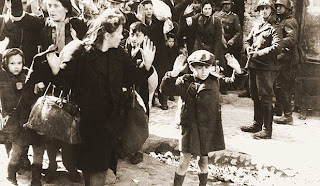 The Jews of the Warsaw Ghetto fought back. Initially, the resistance probably had less weaponry than I have.

But they held off as tough an opponent as you could get. An army well trained, equipped and seasoned in urban warfare.

How would this have panned out if the Jews of the Warsaw Ghetto were armed with AR-15's, long-range hunting rifles, a pistol for all who would hake up arms and ammo, food and survival goods caches all through the city?

A different outcome, I believe. Especially if similar uprisings sprung up all over europe simultaneously.

But then, if the citizens of Europe were armed like the patriots of the USA- would this tragic piece of history have ever occurred?
Posted by Oswald Bastable at 09:23

And as we speak a city of a million people are cowering in their, for the most part gunless, homes, held hostage by a wounded? nineteen year old Chechen

And still the sheeple call for "gun control".....oblivious to history, hoping for a different outcome.
But the wolf is still a wolf, wishful thinking and singing Kumbaya notwithstanding.