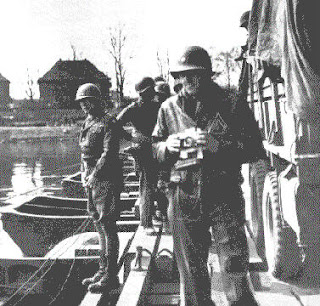 For those who don't know the history, this is General (note: GENERAL) Patton pissing in the Rhine- symbolically pissing on Nazi Germany.

It's a soldier thing. You pissed me off and now I'm pissing on YOU. I'm showing contempt for a sorry sack of dead shit.

Some cunt in a comfortable radio station studio holding court on the talkback is never going to understand what it's like to be shot at, have someone's brains splattered over you, been on the end of a mortaring, gone without more than 2 consecutive hours sleep  for a few months- you get the picture?
Posted by Oswald Bastable at 19:46

A good analogy Os, of what the bleeding heart brigade progressives have shat in our eyes with. I don't know if this post has been put up in protest against the media that have well and truly gone out of their way in showing up some naive Marines when they decided to urinate on their dead foe, but really, who cares? You and I both know we would have done the same thing!

I have put up my own post about that incident. you know, the more I learn about George S. Patton, the more I admire him.