Its a DEAD possum, FFS 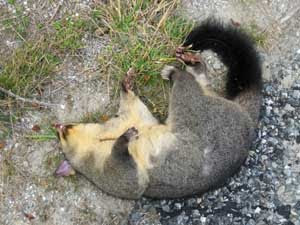 "The SPCA plans to talk to a rural Manawatu school after receiving complaints about a possum throwing contest.

Last week, the Manawatu Standard ran pictures of the children at Colyton School participating in the contest, in which pupils grabbed possum carcasses by the tail and lobbed them through the air to see how far they could toss them..."

It's a DEAD POSSUM. In NZ this creature has the same status as the common Rat.

And it's ALREADY DEAD.

You can't be cruel to a DEAD critter.

The SPCA need to stick to going after people beating dogs and kicking kittens. Like it used to before the greenie faction took over...

Posted by Oswald Bastable at 21:03