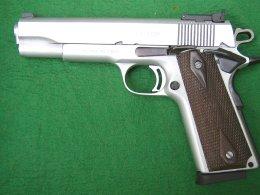 Accepted into service by the USA as model of 1911, designed by John Browning several years earlier. Now, the grunts in Iraq all want one of these on their belts- the new 9mm just doesn't cut it. As the US army found out fighting the Moro's at the turn of last century- .38's just didn't drop the bad guys quick enough.

JB has designed guns that are still in service- they can't be improved on significantly. One of the major manufactures did a study on pistol ergonomics, with the aid of modern technology to discover that the 1911 had got it right- the size and angle of the grip was the optimum, fitting the widest variation of the population!

Of course, the pouges in their air-conditioned offices don't have to bet THEIR worthless lives...

This is my one( the top one- I can't figure out how to move the damn thing!)- A Tanfoglio copy of the original. The same design, but better materials and craftsmenship.

Posted by Oswald Bastable at 18:41